“Hyper solar concentration layer and moth eye anti-reflection coating”- by Jay.S.Parikh. He is the engineer in R&D department of Supreme Gridtech.( One of group companies of Supreme)

“Thank you so much for providing me with another opportunity with your new venture in Bangalore. Once again i had a chance to learn from my experience in the two conferences and the internship under Mr. Ganesh”- Jay.S.Parikh

Ultimate goal of reduction per watt of generation reduces.Abstract—Solar power has the potential to become the primary source of generation if the economic drawbacks currently faced can be eliminated. With the reduction in the amount of conventional sources remaining in the earth’s crust our primary concern has shifted to development of renewable sources of energy.

Solar energy is hence of very high importance and extensive research is conducted on the development of better and more economic technology is this field. Our main aim is to utilize maximum possible incident solar radiation in the cheapest possible way. New developments in achieving these goals are hyper solar concentration layer and moth eye anti reflection layer.

THIS paper aims at highlighting the aim, functioning, advantages and drawbacks of the above mentioned layers that have been recently developed.

The hyper solar concentration layer is a revolutionary concept and it can genuinely bring about a steep reduction in the solar power generation cost. It is essentially a layer comprising of micro photonic components that can magnify the the incident light 300%[11]. It not only eliminates the cost to of expensive lens and other materials but can also help in the reducing the cost per Watt of generation by reducing the number of cells required per panel.

The layer would be add on to the existing solar cell or could be mounted on new ones with lesser cells. It would however be most efficient with solar panels comprising of lesser number of cells and capable of producing the same amount of power. The arrangement is as shown below:-

As shown above that the number of cells required is significantly reduced.

Next layer to be discussed is the moth eye anti-reflection layer. As the name indicates the layer takes inspiration from the texture of moth eye. The eye of a moth comprises of microscopic nipples that successfully trap most of the incident light. The nipples are nano structures that are smaller in size then the wavelength of light. so the light sees the surface as having a continuous refractive index gradient between the air and the medium, which decreases reflection by effectively removing the air-cell interface. 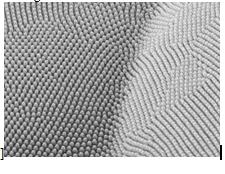 The pictorial representation of the moth eye is shown above.

II.HYPER SOLAR CONCENTRATION LAYER AND HOW IT WORKS

As mentioned earlier the hyper solar concentration layer is a magnifying layer that helps in magnifying the incident light up to 300% It is developed recently by a company known as HyperSolar. The proto types have been tried and tested and it awaits being commercialized.

The technology used is an innovative one which comprises of microphotonic structures that perform magnification, routing and wavelength separation of incident radiation. The functioning of this layer is best described by the 4 steps:-

The image shown illustrates how the solar radiation can be concentrated without the need to use expensive lens which are not only uneconomical but also bulky.[4]

As described above the heating problem that solar cells face can be eliminate from the roots by segregation of the incident wavelength and discarding the ones that cause the heating to occur.

Losses in solar power generation will lead to increase in the cost per watt of power generation. It is indeed our aim to reduce the cost per Watt of generation and hence we need to minimize losses due to reflection. The science of developing technology from nature’s inspiration is known as bio mimicry. Scientists have realized that moth eye’s structure ensures minimum loss of light as it is vital to capture maximum light which enables the moth to see even in what would be darkness to human eyes.

Below shown are certain layers that have been developed based on this technology. The height of the closed pillar structure and the distance between the pillars determine the effectiveness.

It was found after research that it was a difficult task to mount these minuscule pillars on the surface as the process of making the moth eye based antireflection coating turned out to be an expensive process hence there are other developments made. The difficulty in the pillars gave rise to the inverted pyramids technology that is widely used in now in several high end cells like PERT.

Hyper solar technology can play an important part in bridging the gap between generation costs of solar power with other cheaper sources.Hyper solar concentrated layers are still under development and not commercially available.Moth eye anti reflection can ensure maximum absorption of incident light.The lower wavelength of light spectrum can be successfully captured as well. Maximum utilization of renewable sources is realizable.

I would like to thank Dr. Jackson and Dr. Kurinec for helping me select a suitable topic and guiding me in my endeavor to research on the topics discussed above.